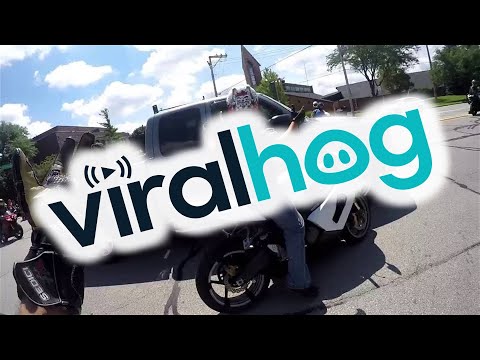 The internet is a place full of clips where everyone is furious. Most recently, the angriest situation on the internet was between Hillary Clinton and Donald Trump voters. Now, this situation continues between those who are against Trump`s administration and those who supports it. However, if you wish to break up this monotony, you can watch this truck road rage video. In this one, we have another questionable scenario that shows an angry truck driver. However, we can`t really tell the real reason why he is angry. Nevertheless, just like most road rage footages on the internet, we have a situation that is handled very poorly.

Especially when you take in mind that this truck driver is putting other people`s lives in jeopardy. We can understand that you can be angry at these bikers for blocking an entire street for no real reason. However, in this situation, the truck driver should`ve called the police or try to sort this out using words. Instead, he decided to go on a very dangerous truck road rage that could`ve resulted in running over people on motorcycles. Even though we are not lawyers, we can safely say that this is a criminal offense. However, we will leave you to be the judge. So, take a look at the footage below as it shows everything through GoPro cameras mounted on the motorcycles.

At last, here are some things all car and truck drivers should know about motorcycles!