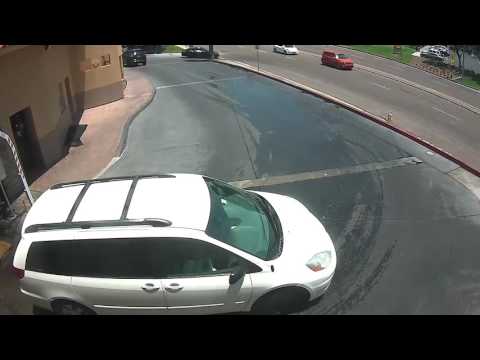 Crashing your vehicle after you have washed it is most probably as frustrating and upsetting of a disaster as you can imagine. Now, we are not saying that it would be less frustrating if the Toyota Sienna minivan in question had not been washed, but most certainly it would be less ironic. However, let`s forget about irony for a moment and go with sarcasm. The video`s description says it best. It says that`s how they wash vehicles in Montana! All jokes aside, because of this drop, the Toyota minivan took a very hard tumble. Nevertheless, we just can`t fathom how this driver drove over the edge.

After the car washing was done, this Toyota driver attempted to make a turn left in order to exit the car wash. For this, he only needed to do a smooth left-hander. However, instead of that, it looks like he mistook the accelerator for brake pedal. To make things worse, the Toyota Sienna minivan landed on the roof and busted open a hydrant that flushed rain water on the minivan`s underside. The fire hydrant flooded the entire exit ramp and got the nearby street wet as well. We hope that the Toyota driver and everyone else in the vehicle were unharmed by this incident.

Finally, follow this link to read more about the World’s most expensive car wash.