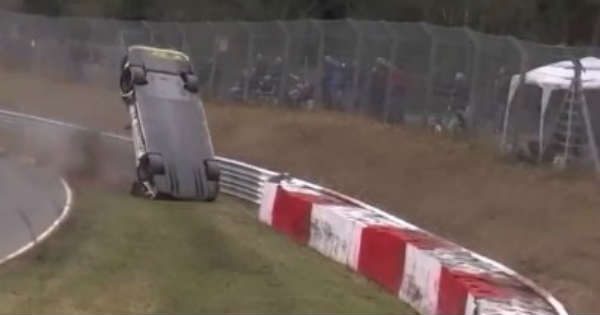 Accidents taking place while racing are not something uncommon. Throughout history many famous drivers have been injured and some even lost their lives while racing. In the following video we see a horrific Nissan GTR crash at the Nurburgring. Namely, the driver of the Nissan was driving with very high speed which caused his car to lift off from the road at a jump. The front of the car tilted up and the whole car flipped and launched itself out of the road. It crashed just where the spectators were standing. The safety fences could not to anything to prevent it.

So what do you think, what could have prevented this accident from occurring? The reason why the car was lifted in such a way was probably the high speed the Nissan was going combined with the aerodynamics of the car. People who were at the spot where the car crashed rushed in panic to see if anyone got injured. Supposedly, this Nissan GTR crash even caused fatalities but we do not know the exact number. This crash is a perfect example of the dangers someone might face while watching a race near the road or outside of the corners. Stay safe!

Here you can see the biggest Nurburgring crashes that happened last year.

This alternative view of the recent Nissan GT-R race car crash at the Nurburgring really shows how bad it was. Scary stuff.