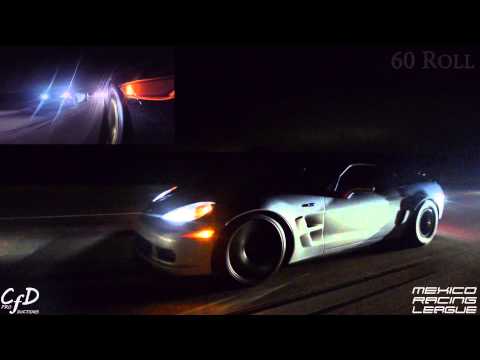 You know that one of the things for which Mexico is known for, are those hot chili peppers that makes us feel like we are just about to start spitting fire. Well, the following street drag battle that is coming down from Mexico, with two awesome examples of ultimate sports cars, the 2001 Corvette ZR1 and the 2014 Nissan GTR R35, makes these cars look like they are about to turn into a mechanical dragons and start spitting fire!

There is no doubt that the Corvette ZR1 is one of the best and most powerful `Vettes that has ever come out of the Chevrolet`s factories. And when you have an example like this one, with so much engine improvement and a high level of modifications, then it is clear that we are talking about a real monster. Amongst many things, it has Ported Blower, Pulley + 150 Shot, and it is running on E85 fuel (which is about 85% denatured ethanol fuel, the other 15% could be gasoline or other hydrocarbon). And yes, I almost forgot it, it has an engine that develops 1 000+ HP!

On the other hand, this 2014 Nissan GTR has no shortage of modifications either. Equipped with an engine with Boost Logic BL110 Package and Twin HTA 30r Turbos, this monster is giving an output to 1 1000 HP.

So I think that you are grasping the gravity of this street drag race that you are about to watch in the video below. If you ask me, it is not so much about who wins it, but the spirit of the street racing itself.

And if you want to see many other Corvette drag racing videos, then go to this link, you will find plenty of it.