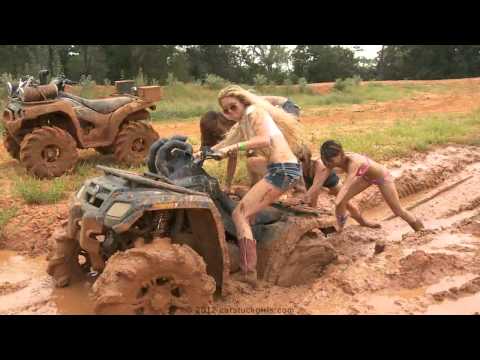 When you don`t have an all-wheel drive vehicle and you still decide to go venturing in some snow, sand or mud, you might deserve to be unable to leave without any help. When you take a VW Beetle up in the mountain in winter, you quickly learn that it`s a really bad idea. This teaser shows women stuck in all kinds of situations, but ones that we`ve definitely seen before. One even managed to get stuck while driving a Power Wagon, although she did set herself free after a while. If that had happened in mud, there would have been a fair amount of mud wrestling afterwards, no doubt.

The same can`t be said about that lady with the Mini Cooper and high heels knee deep in snow, though, or the one with the Mustang in the mud. If only things existed such as chains, winter tires and common sense. My favorite one was four girls getting stuck in the mud in a quad bike which just goes against all three aforementioned precautions. These scantily clad women stuck in all kinds of situations (even a Wrangler in the sand!) may be a feast for the eyes, but the sheer amount of stupidity will surely get on your nerves.

Wondering how to never get stuck in mud again? We have the number one solution!