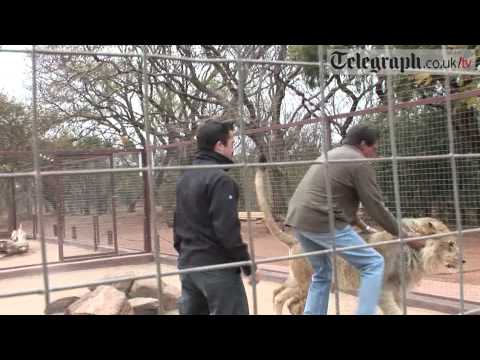 Telegraph`s travel correspondent and journalist Charles Starmer-Smith received an invitation to enter a lion`s cage in a South African zoo. He was invited to experience the wild animal up close. However, he got a way closer view that what he intended. Even though there is a sign in front of the cage that says “Danger, stay behind the barrier,” he decided to get inside the cage. The guy who is responsible for the lions in the zoo, told him to not be scared because they can sense fear, apparently he was quite scared. Otherwise we wouldn`t have this ” lion attacks journalist ” video that went viral in one day. We bet he got some bonuses for this.

So, here is how everything started. After entering the cage, the journalist tries to pet the lion and it seems like everything goes according to plan, when all of a sudden the lions gets a bit more aggressive. It puts its claws around his back and also bites him on various places. Sure, the lion wasn`t aiming to injure the journalist, otherwise this would`ve had a much worse outcome. It took a while before the lion handler could calm the lion down and the journalist to leave the cage. So, there is a lesson to be learned. No place to wonder why lion attacks journalist in this video. Don`t treat wild animals like pets, plain and simple. Check out the video and all the injuries Charles Starmer-Smith sustained.

If you want to read more about the worst animal attacks, follow this link.