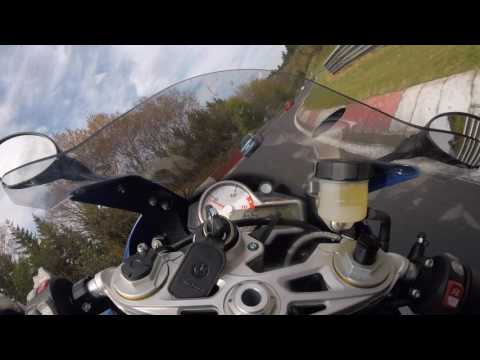 Unprofessional racers or just people who enjoy the speed can test their vehicles on the tracks such as the famous Nurburgring where no license is required. But this type of racing can be and it is very risky. Amateur drivers tend to let their adrenaline take its course while driving, not being aware of all the dangers they could fall in. Racing on the tracks and going with high speeds requires great concentration. Just a fraction of a second could lead to serious injuries or even death. This was surely the case with this BMW S1000RR rider who just managed to escape death when he was hit by a car while speeding through the tracks.

Everything was going well for him and by his fourth lap, he felt very comfortable and got way faster, but he was still aware of the traffic on the track. There were few sections on the track that seemed rather busy, but he cautiously managed to get past them. Nevertheless, after successfully overtaking a car at the turn, and going with speed over 105 MPH, a car bumped into him and he NEARLY crashed into the barriers on the side. Only his great concentration and the way he kept calm helped him safely escape death. He clearly knows how to handle a powerful motorcycle as the BMW S1000RR is. His last lap time has been 7:25 just before he was hit by a car.